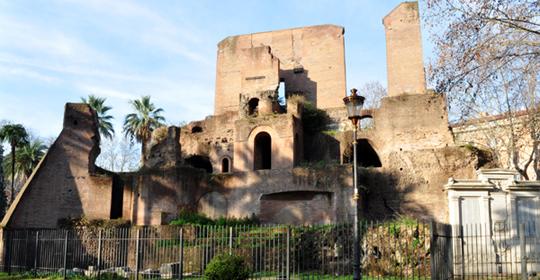 Piazza Vittorio Emanuele II, also known as Piazza Vittorio, is a wide rectangular square completely surrounded by arcades in Piemontese style, unique in this type in Rome and with its dimensions of 316×147 side meters, is one of the biggest squares of the Capital. This square was dedicated to Victor Emmanuel II, the King, who unified Italy, In the middle of the square there is a big garden (recently restored) that exposes remains of the so called Marios’ trophies: a ruin of a fountain from the Severian Age.
The marble decorations of the “Trofei di Mario” in 1590 were transferred to the balustrade of piazza del Campidoglio. This was formerly the terminal of an aqueduct. of Acqua Giulia. The “Trophies” were monumental marble compositions that the war leaders were dedicating to the divinities of their temples, to commemorate their victories. The square (by Koch, Codesti and other architects) is surrounded by porticoes and planted with plane trees, cedars of Lebanon, and oleanders.
The remains of the antique Villa of Prince Poniatowsky, noble of Polish origin and famous alchemist of ‘700, where the “Magic Door”, gives more interest visiting the park. You can find alchemic symbols on the ancient pillars, and the legend says that there is a magic formula hidden about transforming simple metals into gold.
In a corner of the square you can spot the Church of Sant’Eusebio dating back to the IV century and restored in 1230 under Pope Gregorius IX, it was rebuilt in 1711 by Stefano Fontana. 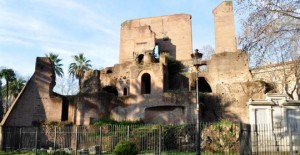