Also known as the Basilica Eudoxiana, it was first rebuilt on older foundations in 432–440 to house the relic of the chains that bound Saint Peter when he was imprisoned in Jerusalem, the episode called the Liberation of Saint Peter. In fact Vinculis (links, but also chains) is a reference to that miracle concerning the chains of St. Peter. The Empress Eudoxia (wife of Emperor Valentinian III), who received them as a gift from her mother, Aelia Eudocia, consort of Valentinian II, presented the chains to Pope Leo I. Aelia Eudocia had received these chains as a gift from Iuvenalis, bishop of Jerusalem. According to legend, when Leo, while he compared them to the chains of St. Peter’s final imprisonment in the Mamertine Prison in Rome, the two chains miraculously fused together. The chains are kept in a reliquary under the main altar in the basilica. The basilica, consecrated in 439 by Sixtus III, has undergone several restorations, among them a restoration by Pope Adrian I, and further work in the eleventh century. From 1471 to 1503, in which year he was elected Pope Julius II, Cardinal Della Rovere, the nephew of Pope Sixtus IV, effected notable rebuilding. The front portico, attributed to Baccio Pontelli, was added in 1475. The cloister (1493–1503) has been attributed to Giuliano da Sangallo. Further work was done at the beginning of the 18th century, under Francesco Fontana, and there was also a renovation in 1875. It is a “touristic must see” also because it houses the statue of Moses by Michelangelo.

Moses (sculpture, c.1513–1515)
The statue of Moses by Michelangelo Buonarroti was designed for a grand monument to be placed in the centre of St. Pietro (new), the new basilica which Pope Julius II decided to build on the site of the existing one. The death of the pope in 1513 stopped the completion of the monument. The statue depicts the Biblical figure Moses with horns on his head, based on a description in the Vulgate, the Latin translation of the Bible used at that time.Foto del Monumento : 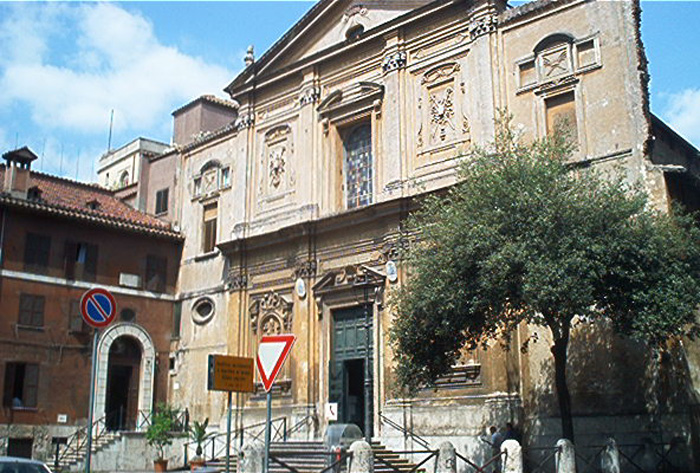 It is a parish and titular church on ancient foundations dedicated to St Martin of Tours, a 4th century monastic founder and
bishop of Tours in France(the present official name is Sant Silvestro e Martino ai Monti).
The earliest churches of Rome were either new constructions built on the sites where martyrs had been buried or the result of changes made to halls in private houses where the first Christians used to meet for prayer. Because the new faith spread rapidly among the ordinary people who lived on the Esquiline hill, this neighbourhood retains many very old churches which in origin were private houses. The basilica was founded by Pope St. Sylvester I over a terrain donated by one Equitius (hence the name of Titulus Equitii) in the 4th century. At the beginning it was an oratory devoted to all the martyrs.
Under the major altar are preserved the relics of Sts. Artemius, Paulina and Sisinnius, brought here from the Catacomb of Priscilla. They were joined by the relics of Pope St Martin I 649-655), who died as a martyr in the Crimea.
The acts of a synod held in 499 mention a church Equitii. The next bit of evidence is from the so-called Fragmentum Laurentianum, written about 516, which records the foundation of a church dedicated to St Martin only, near Sancti Sylvestri. The synod of 595 mention a church dedicated to St Sylvester.Pope Adrian I, in 772, provided for the restoration of a ruined basilica dedicated to St Sylvester, and also for a church dedicated to St Martin. Two churches are distinctly mentioned in some documents, but finally at the start of the 9th century Pope Leo III is described as endowing the diaconia Sancti Silvestri et Sancti Martini. To summarize, it seems that there were two churches here, side by side. It is thought that the aula a sei vani (a 3rd century building)was that dedicated to St Sylvester, and that the present church was originally dedicated to St Martin only. There remains some controversy over the location of the Titulus Equitii. It may have been located under the latter, or at another place in the area. 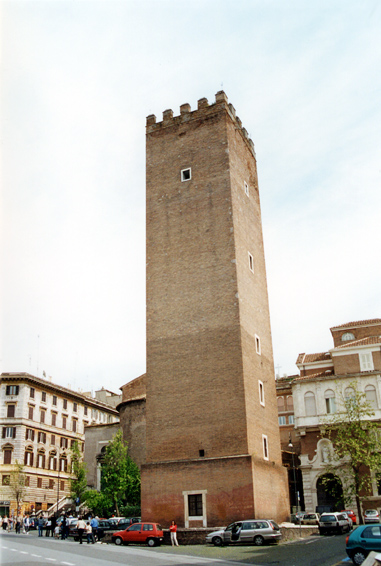 Torre dei Capocci, along the opposite Torre dei Graziani, constitutes a kind of monumental entrance to top of the hill Esquilino. Built by the family of Arcioni in the 12th century, it afterwards went to the Capoccis, a noble family from Viterbo. These erected around the tower a number of houses, which no longer exist, but which made the building a sort of citadel. The tower, 36 meters high, has a square base, has windows framed in travertine and consists of seven floors, in addition to the ground floor and the terrace, the latter bordered by a brick parapet, edged by five full battlements on each side, emerges where the output hopper of the staircase.

S. Prassede was built in the IXth century by Pope Paschal I; it replaced a nearby church by the same name. According to tradition Prassede and her sister Pudenziana were daughters of Pudente, a Roman senator converted by St. Paul; Prassede became a very popular saint for having gathered the blood of three thousand martyrs with a sponge and filled a (lost) well with it.
The new church was a large building with a spacious central nave and two minor ones separated by ancient columns (probably taken from the ruins of Terme di Traiano); the apse was decorated with mosaics and it was preceded by an arch which also was decorated with mosaics . Hidden behind a very plain exterior, the unassuming Basilica of Santa Prassede—or Church of Saint Praxed—hides some of the most beautiful Byzantine mosaics in the city. While not as brilliant or polished as those in the eight Ravenna churches and mausoleums that comprise a UNESCO World Heritage Site, they are nonetheless breathtaking and priceless as well as superb examples of early Christian art and architecture. Other treasures in the Santa Prassede Church include a reputed piece of the column where Christ was scourged that was brought from Istanbul (then Constantinople) in 1223 during the Middle Ages, and relics from the catacombs in the crypt that had been abandoned as early as the ninth century. There is also one of the sculptor Bernini’s earliest works, a bust of Cardinal Santoni made when the artist was only seventeen years old—long before he created the masterpiece Fountain of the Four Rivers in Piazza Navona. The Church of Saint Praxed contains the sarcophagi of St. Prassede and his sister St. Pudenziana, as well as three sarcophagi retrieved from the catacombs under the crypt. The interior is quite lovely, but everything is overpowered by the incredible mosaics shining in brilliant gold. All are original, dating to the original construction of the structure in the ninth century. As was the custom in early Christian Byzantine art, the mosaic tiles are of tesserae—fine glass tiles with gold leaf sandwiched between them. Mosaics cover the apse arches and the apse itself.

Saint Zenone (funeral shrine, 9th century)
The 8th century Saint Zenone Chapel in the Church of Santa Prassede was built by Pope Paschal I to serve as a funeral chapel for his mother Theodora. It is one of the masterpieces of byzantine art in Rome. The external portal is made up of reused classical elements and above is the mosaic with the Virgin and Saints and Christ and the Apostles. The splendid interior, on a gold background on the vaulted ceiling is a tondo with Christ Supported by Four Angels surrounded by other scenes including Christ in Limbo, the Gemmed Throne with Saints Peter and Paul, the Transfiguration, the Virgin, Santa Prassede, Santa Pudenziana and Teodora, the mother of Paschal I (with the square halo). The Pope employed talented artisans to bedazzle the chapel in gold and glass mosaics, which can still be appreciated in all their glory in an intimate space just off the church’s right aisle. It is the only chapel in Rome completely lined with mosaics.

The Auditorium of Mecenate is located in the park of Largo Leopardi (along via Merulana) and currently well maintained as a whole; its discovery was made in 1874, during the excavation work for the construction the Esquilino area. The building, now protected by a roofing, originally had a vaulted roof, and consists of a large hall 24 meters long and 13 wide, with a semicircular apse on the bottom which has a staircase with seven concentric steps. The peculiarity of the building, however, is the pictorial decoration, realized at the beginning of the first century AD, which is well maintained both in the niches and on the top, where there is all along an ornament on a black background with Dionysian scenes and miniature gardens. The steps that distinguish the back wall are too small to let us think it’s a theater (idea that, at the time of the discovery, gave name to the place), in fact it is nothing but than a monumental fountain. This room, richly adorned and enlivened by water games which increased the already cool environment of the basement, was probably used as a “summer triclinium”, that is a place of convivial meetings and cultural events. The verses of an epigram by the poet Callimachus, found painted on

Built by Augustus in travertine rock, the arch of Gallieno is located at Porta Esquilina, inside the Servian Wall. A dedication to the emperor Gallieno and his wife Salonina was inscribed on the arch in 262 AD by M. Aurelius Victor, a common citizen. Flanked by angular Corinthian pilasters, the slightly squared arch was originally intended to have three barrel vaults. In the Middle Ages, two keys from the city of Viterbo were hung on the arch as a reminder of the city’s submission to Rome; they remained there until 1825.
It was here that the ancient Roman roads via Labicana and via Tiburtina started.